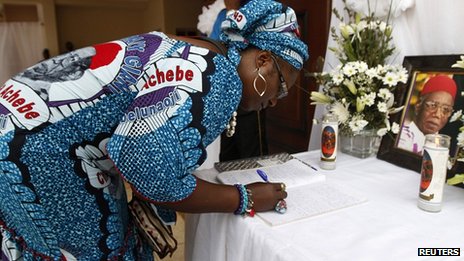 Thousands of mourners have paid their last respects to renowned Nigerian author Chinua Achebe in his home town in Anambra state.

A host of dignitaries attended the funeral including Nigerian President Goodluck Jonathan.

The author is widely regarded as the founding father of African literature in English.

The BBC’s Will Ross, who was at the funeral, said that Mr Achebe was given a colourful, grand send off in his home town of Ogidi.

However, much of what he abhorred was on full display at the service – political patronage and the trappings of power, he says.

Local politicians were escorted into church by men from the State Security Service wielding sophisticated weapons while a large number of men and women came dressed head to toe in political party outfits, our correspondent adds. 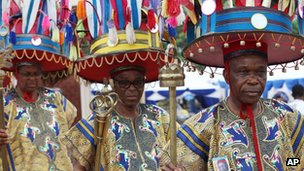 President Jonathan and Ghana’s President John Dramani Mahama flew in by helicopter to attend the service at the packed Anglican church.

Thousands of mourners followed proceedings from huge marquees outside.

President Jonathan said Mr Achebe’s writings – which were often fiercely critical of Nigeria’s leadership – remained an inspiration for political leaders to do better.

He said he had not known Mr Achebe personally, but had admired him.