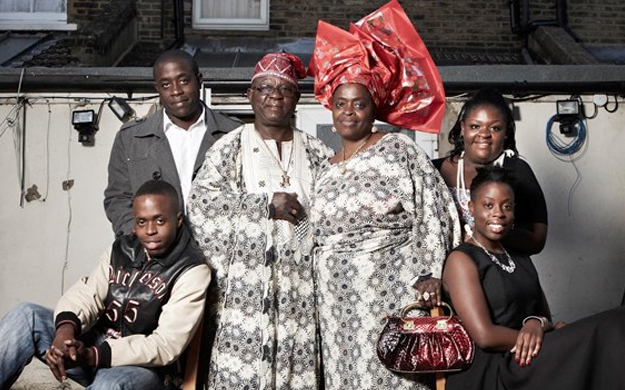 When I heard that the third series of Channel 4’s award winning documentary The Family would be featuring a Nigerian family, my reaction was at once one of excitement and trepidation. Excitement because this was the first black family to ever feature on the series (never mind that this is only the 3rd series of the show), and trepidation because I could only imagine the cringe-worthy display that could potentially follow. So I got myself ready to meet the Adesinas, armed with some popcorn (in case it was really good) and a book (just in case it wasn’t).

We were introduced to mum Vicky and dad Sunday who have been married for 30 years, described as traditional Nigerian parents with strong views on God, love and family values, with four British-born children from 15 to 27, all living at home. Ayo, the eldest son, is 27. He currently owns an IT company, but still dreams of making it as a rapper. Julie (25), Olu (23) both work in the family business, and Olu dreams of owning it all someday. At 15, Ola is the baby of the family and is home for the summer from her exclusive boarding school. Together they run a family business: a Nigerian takeaway and restaurant.

The first episode was as I had imagined. The Family shamelessly played up to the cameras – there was constant bickering and happy slapping among the kids (except these kids are in their twenties) and some weird and wonderful dancing by mum (don’t ask). Ayo (the eldest) smoked a lot and rapped at every opportunity he got, although the rapping was atrocious, and it seemed as though he went out to smoke just so he could get his raps in!
There was nothing engaging about The Family, and I could only imagine the number of Nigerians across the UK who watched the first episode and shuddered, thinking what I was thinking – that Channel 4 had found the worst of us to profile. Especially when at the end, intoxicated by the success of her husband’s 60th birthday celebrations and when watching a replay of the day on DVD, Mrs Adesina declared “We are true Nigerians!”

I watched episode 2 in spite of myself. With the parents away in Nigeria, Julie decided to ‘help’ her sister Ola with her weight, her studies and God knows what (with less than happy consequences), while Ayo decides to throw a house party. There was too much fighting and bitching for my tastes, but I somehow found myself being drawn into Ola’s unhappiness because of her sister’s poor attempts to help her. It was obvious that Julie was trying to be helpful, but constantly nagging her siblings and shouting at them (oh, and saying “better check that attitude”) did not do much to endear her to anyone. Least of all those she was trying to help.

I was determined from the start to never like The Family. I felt the Adesinas did not and could not represent Nigeria, with her rich and diverse culture. We do not all hold the same values, so how could any one family satisfy all? “Where” I asked after the first episode, “are the families with children who responsible and who have passion and drive, despite being born and bred in the UK?” “And where are the families who have noticeably instilled true Nigerian values in their children, against all odds?” As a Nigerian, I did not recognise the so-called Nigerian values touted by Channel 4, and I felt incredibly let down.

However, I do recognise the hardworking parents who, against the odds, built their business from scratch and make every effort to give their children have the best that they can give. I recognise love, as intangible as the air we breathe and every bit as real. I recognise our methods of communicating (at the top of our voices) which so often baffles the Western world… the Adesinas may not be everyone’s cup of tea, but I am prepared to give them a chance.

Tonye Tonye Porbeni Adenusi is an avid cake decorator, with a wide range of interests. She enjoys writing and spending time with her family.